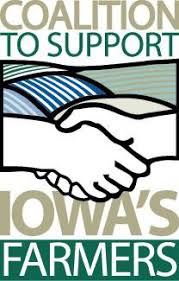 At the start of this harvest season, I was talking to the guys in the field after hanging out in the buddy seat of the combine. The topic of fish farming was brought up and I was immediately intrigued. Apparently expanding the farm was the topic of the day and they were kicking around either putting up a fish facility or a hog confinement.

My mind immediately went to the aquaculture facility. Hog confinements were nothing new. I had worked in them before and had a grasp of the basics. A fish farm, however, sparked my curiosity. Where would we put it? How large could it be? What type of markets are available? I started doing research when I got home that night. It looked promising. I sent a few emails and received positive feedback for marketing.

Devin had mentioned an aquaculture conference in Ames that he would like to attend, but with it being in the middle of harvest, he wasn't sure he could get away. I volunteered to go in his place. I love going to conferences and it would give me ammunition to use for what I was certain was going to be my new project.

I arrived in Ames to find it was at the same hotel that I had stayed in only 48 hours before. The desk attendant even greeted me. Walking in I was shocked at the number of people. Over 200 people had showed up when I was expecting a crowd of 20. I found a seat and was heading to get something to drink when I ran into Delaney Howell. Delaney has been incredibly helpful in getting the podcast off the ground and it was nice to see a friendly face.

The first session was interesting, but the second was key. Apparently starting a fish farm was going to remain a dream as I listened to our keynote speaker talk about the costs of such an operation. Raising fish is the most expensive animal to raise per pound. Yep even more than cattle. On top of that, almost all of the fish in the United States is imported and there is a heavy foreign market. When she asked the room how many people raised fish, only two in the whole crowed raised their hands.

While this information was disheartening, the highlight of the day was lunch. The food itself was good, but I was late getting in and therefore had to sit at what I would call "the big kids" table. At this table were two of the conference presenters along with a former state representative, a member of the Iowa Corn association, and one of the directors of Farm Bureau. We had an interesting conversation and I was able to secure some future interviews for the students. So while I did not get a new project in the form of a fish farm, CAC did get some great interviews. All in all it was a good day.
at November 19, 2017 No comments:

The end of October marks a big event in agriculture. Every year thousands of FFA members come together at the National FFA Convention. Even though Current Ag Concerns is not an FFA based project, we were still on-site to cover the events! I should also mention that we added a new host to the show, Carsen Mangelsen.

During our time in Indianapolis we had the chance to speak with professionals in the livestock industry from across multiple states. We discussed a wide range of topics from livestock judging to show supplies. One of the booths even did a live clipping demonstration on a heifer. It was also a great opportunity to set up future interviews for the podcast!

Speaking of interviews, CAC producers did a number of them while in Indy. The Big Show AM 600 contacted us and asked if we would speak with their representative. This was Carsen's first interview and a good initiation as he had less than 30 seconds to prepare. Lucky for him he can think on his feet! We were also featured on Ag News Daily with Mike Pearson and Delaney Howell. Delaney has been a big part in helping us get our show off the ground and we were excited to reconnect with her on their podcast.

Not all of the week was spent working. We spent a little time having fun and even took in a concert on Wednesday night. Overall it was a productive trip and we look forward to continuing our travels in January when we head to Denver to broadcast from the National Western Stock Show. 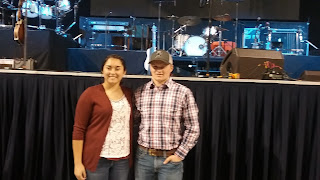 Taylor Flemming and Carsen Mangelsen
at November 04, 2017 No comments: