A Day at the Dairy 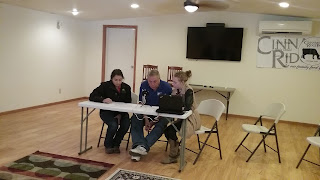 This past week, my team and I were fortunate enough to be invited to Cinnamon Ridge Farm in Donahue, Iowa. Cinnamon Ridge is owned by John and Joan Maxwell and is a fully functional robotic dairy farm. They manage a herd of around 1,000 Jersey cows. Cinnamon Ridge gets its name from the light cinnamon color of their cattle.

After a quick stop at McDonalds for coffee and Natanial's six hash browns, no that is not a typo he really ate six, we were on our way. The day started with a tour of the main barn. Directly inside the door is a cheese making station. Through the Plexiglas we could see a working cutting up curds and packaging them for sale in their on-the-farm store.

The store is unique in that it is ran strictly on the honor system. People can purchase fresh beef, hand made cheese, farm fresh eggs, and a variety of baked goods. Once you make your selections, you place your money inside a slot that goes into a locked box. John tells us this system has worked for years and that people in the community are quite respectful of the system.

Back in the barn, John takes us to see the milking system. Each cow has an id tag that is unique to her. Inside the tag is a computer chip containing data about the cow such as how many pounds a day she is producing and how much feed she is consuming. Cows come into the milkers on their own and are milked by an automatic milker. The number of times they are milked per day depends on how much they are producing. Grain is given to the cow when she comes in for milking. If she has not waited the appropriate amount of time between milkings, her tag will be read and she will be issued out the front without any feed.

Next it was upstairs for an overview of the barn. Through the windows were could see the milking operation and what the other cows were doing. Most of them were lounging in the stalls, some were up eating hay on the far side. Down the center of each aisle was an automatic manure scraper. It moved up and down the barn, cleaning out manure and bits of sand.

Inside the barn is a conference room where Amber and Taylor sat down and talked to John. Interview complete, we gathered together to ask questions and talk cattle. Joan came up to find us and let us know that it was time for lunch. Lunch was in the Maxwell's house. Joining us were executives from John Deere's Russian plant.

After a delicious lunch, complete with Whitey's ice cream, we watched a video overview of the farm and had a chance to ask more questions. The guests from Russia did not speak English and it was interesting to watch John and the translator work together. We then returned to the barn for photos and it was time to head home.

Everyone agreed that touring is far preferable to having a Skype interview, but with some of our long distance conversations, this isn't possible. To learn more about the Maxwell's and their robotic dairy check out the CAC Podcast page on our website. We will be posting the interview later this week!